EMBARK ON AN EGYPTIAN ADVENTURE

Adventurers are on a mission to battle the Curse of the Mummy. Ride through the Ancient Egyptian labyrinth armed with a laser gun to shoot mummies and scarab beetles and rid the tomb of its evil curse. What will you score?

FUN FACT: Tomb Blaster originally opened in 1987 and was known as the 5th Dimension until 1993 when it was given a re-theme to Terror Tomb. In 2001, Terror Tomb shut the sarcophegas, and Tomb Blaster opened for the 2002 season.

In the 2021 UK Theme Park Awards Tomb Blaster was awarded a Bronze medal in the 'Best Interactive Ride' category. 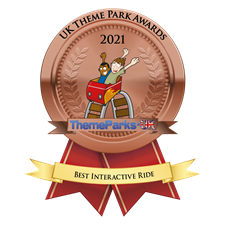