Can you spot us in AMAZU? 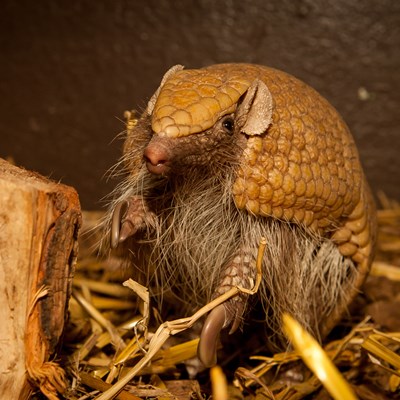 Here at Chessington we have 3 Southern three banded armadillos, 1 female called Tank (born 2015) and 2 females called Flo (born 2013) and Ellie. Ellie is the daughter of Tank and Flo and was born here in 2018! Armadillos are solitary in the wild which is why Tank lives separately to the girls. They can spend up to 16 hours each day sleeping! When they are not in bed they are usually very active, munching on the bugs which we give them to eat. Three banded armadillos can live for about 15 years so ours are still quite young.

Where are they from?

Most species of Armadillo are from South America, specifically from parts of Argentina, Bolivia and Paraguay.

How long do they live?

Estimates vary but on average 15 years in captivity

How big are they?

Estimates vary but on average 15 years in captivity.

Near threatened (declining) due to destruction of habitats for livestock. Also an important food source for a lot of people. Unfortunately not seen as a key species so not really a focus of education or conservation efforts but the rate of decline could see them in trouble soon.